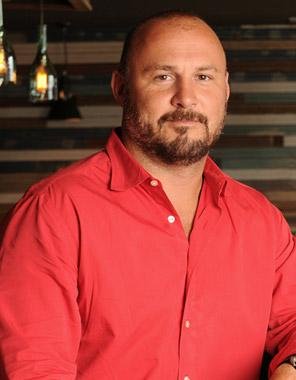 As a surfer who travels the world, in his words, “to immerse myself in food rich in culture with big waves and blue water,” Executive Chef Lance Fegen is an adventurer on many levels. Surfing is considered part swimming, part skiing, part sky-diving and part Russian roulette. And Executive Chef Fegen’s approach to the food offered at the establishments he co-owns, BRC Gastropub, Liberty Kitchen and Petite Sweets, is just as exhilarating as riding the wild surf.

He takes no prisoners. It’s full-throttle. He’s out to thrill restaurant patrons. And he has garnered numerous culinary awards to substantiate his place as a renegade chef extraordinaire whose menus reference his passion as a surfer and are inspired by the natural life styles of the coastal regions he loves. It’s all about fresh, it’s about local ingredients, but always with his own particular creative spin.

Executive Chef Fegen, is a graduate of the renowned Culinary Institute of America, who served as the Executive Sous-Chef of The Houstonian Hotel, opened and owned the very hip Zula restaurant in downtown Houston and went on to open and own the wildly successful Glass Wall restaurant located in the historic Heights section of Houston.

As co-owner of BRC Gastropub, Liberty Kitchen and Petite Sweets, Executive Chef Fegen brings accolades, experience and his famous energy to the table – literally. In addition, he is the devoted husband and father of two children whom he says, “amaze me with their intelligence, good nature and fun spirit every day.